This phrase was heard constantly throughout the streets of Rome during Pope Saint John Paul II’s funeral in 2005.  It means “sainthood now,” and those words echoed in my mind as I approached the Chapel of Mary at Mundelein’s St. Mary of the Lake Seminary for the second time in my life.  There, at the entrance to the Chapel, hang the large icons of two of our recently Sainted Popes:  Pope Saint John Paul II and Pope Saint John XXIII. 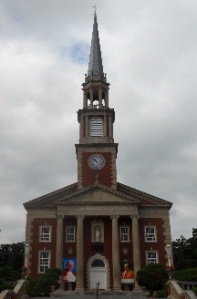 It was comforting to see these images of the two larger than life Saints, continuing to inspire visitors and seminarians alike, in wisdom, patience and courage.  How quickly that Italian phrase was realized!

Nearby, inside the Seminary’s Library, an ornate chair is displayed, with a modest plaque indicating it was used by Pope John Paul II during his visit to Chicago.  I remembered his visit as I touched the chair, reflecting on how close I was standing to a physical artifact used by a living Saint.  I was humbled.

We were visiting Mundelein again as a Scout Unit, during the annual “Fishers of Men” event, hosted by Mundelein Seminary and organized by the Chicago Archdiocese Catholic Committee on Scouting.*   It was a warm and sunny day, as the boys lined up with rods and reels, to listen to the priests and seminarians talk about vocation, discernment, and the joys of religious life.

I’m always impressed by these selfless young men, meeting the daily challenges of study while reflecting on their own callings.  Most of us look forward to a job after college or graduate school, and maybe even think in terms of a career.  But these seminarians think in terms of service and vocation, of a life-style and commitment, which will encompass much more than just a 9 to 5 work schedule.

Family is also a much broader term for these men.  I’ve found priests and religious have extended families compared to most of us.  They find family beyond their parents and siblings, extending their families to include fellow seminarians and teachers (even decades after ordination or vows), close personal friends, and the parishes or communities they eventually serve.  We are all fortunate to call our parish priests Father.

And that is perhaps the biggest difference between my education as an attorney and theirs in religious life:  they graduate to serve others, not themselves.  Which is not to say the laity doesn’t serve.  We do.  But our careers are rarely service.  We work to provide for our own wives and children, and for ourselves in later years.  We serve our parishes and communities in our spare time.

I try to explain this to our scouts, through scouting’s religious awards programs, special scout masses, and these retreats.  Religious life is a choice that all young people should consider, and discern in the silence of their hearts.

I remain hopeful that our society is less materialistic, at least for this coming generation.  We need to defeat secularism, but I hear less from my scouts about having a fast car, large house, or massive wealth, than I did from my peers during my own younger years.  Time with family and friends is becoming, appropriately, more important to our youth, even if it takes the form of texting, tweeting, and skyping.

The chase for riches is an empty one.  This was the lesson my generation had to learn.  I hope our younger generations learn lessons about the society they are confronted with, whether those involve peer popularity, instant gratification, global competition, or simple information overload.  I hope they find answers to these challenges in our Faith. 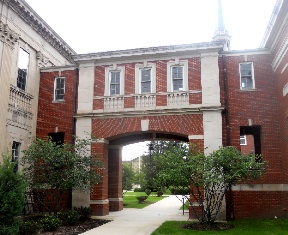 In the end, most attorneys (and other professionals) I know cherish their volunteer time.  Giving of ourselves feeds the soul, as we lay up treasure in heaven.

How great would it be, if fulfilling those endeavors was your full time job?

*          the Chicago Archdiocese Catholic Committee on Scouting we page is: